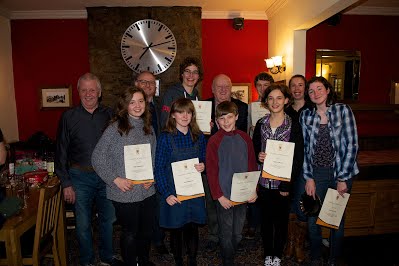 Barnstaple Pilot Gig Boat Club held their annual awards evening on Sunday 10th January at the Rolle Quay Pub, immediately following on from a rowing training weekend at Appledore. Club members were pleased to be joined for the evening by Councillor John Mathews, Councillor Ian Roome, Peter Woodhams (Landlord at the Rolle Quay Pub), and the Club President Keith Abrahams, all of whom are ardent supporters of the Club and donators of some of the trophies awarded .
Tony Layton (club chairman) and Chris Walter (vice chairman) briefly ran through the highlights of the 2015 rowing season before asking the guests to present their trophies to the club members nominated to receive them. These were as follows:

Tony Layton commented on the wonderful spirit within the Club, as shown by the wide range of nominations for the ‘member who has contributed most to the club’, and the approaching competitive rowing season is looked upon as an opportunity for both the junior and adult sections to build on past successes.