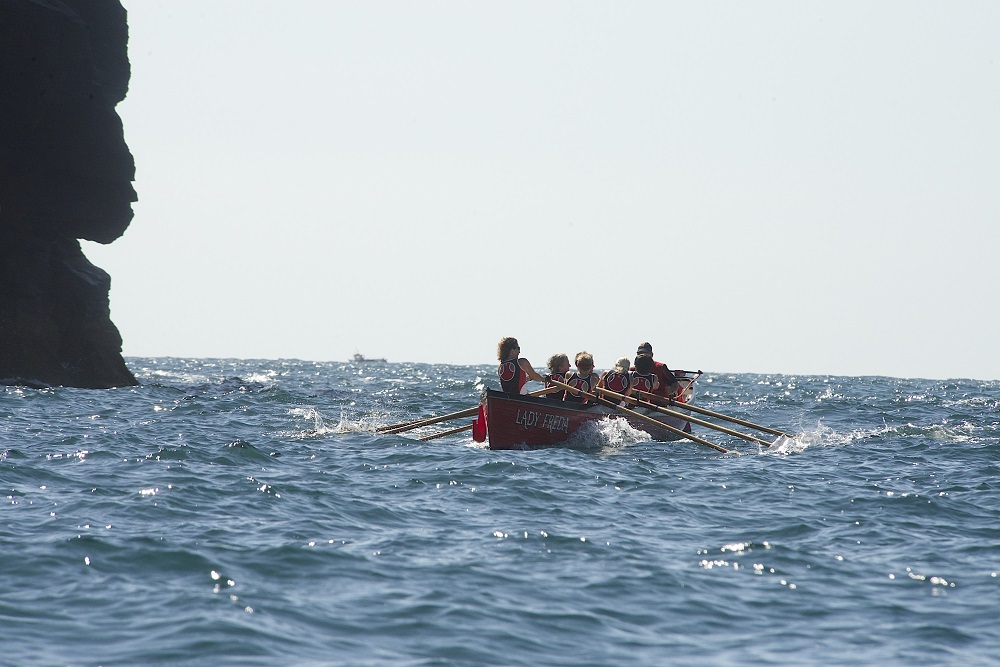 Barnstaple Pilot Gig Club sent 27 rowers to take part in the World Championships in the Sicily Isles for the Bank Holiday weekend and a number of supporters attended as well.
The first event was the Supervet races on the Friday and, as a tribute to David Butt, Barum rowers wore black armbands during the race. David was a good friend to the Club and he gave a great deal of assistance during its formation. In addition many Club members knew David personally and were sorry not to be able to attend his funeral that day.
Racing conditions were difficult for the Barum rowers, with strong winds whipping up confusing wave patterns, but both the Ladies and Men’s crews improved on last year’s performance in the Supervets races, the Ladies placed 17th out of 25, and the Men 24th out of 32.
The two boats Nipper and Lady Freda were used by both the Ladies and Men’s crews on Saturday and Sunday for the remainder of the Championships, and some Barum rowers helped other North Devon Clubs by filling vacant positions for some of the races.
The Ladies crew in Lady Freda were featured on BBC’s Spotlight programme when they were involved in a spectacular collision during their final race. The Barum crew had led their group nearly all of the way to the finish line in St. Mary’s harbour when a boat behind them collided at speed on the stern quarter; this knocked Lady Freda into the path of another boat which struck the bow quarter just as the other boat’s rowers were sweeping their oars back. The Barum rowers took avoiding action but one of the ladies received a heavy blow on the arm and ended up on the floorboards. In the meantime, Ilfracombe’s ladies in Rogue were pulling up rapidly on the outside and crossed the line first, while the three boats involved in the collision drifted past the line. Lady Freda was awarded third place, but North Devon’s honour was upheld by the Ilfracombe boat.